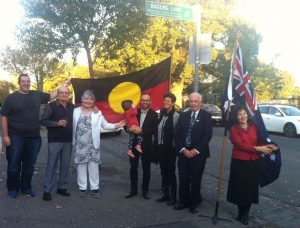 at the  PRINCES HILL COMMUNITY CENTRE

The PHCC Committee is excited to announce that the lane between Macpherson and Richardson Streets outside our building has received the name ‘Bagung’, honouring the Indigenous traditional owners.

Trevor Huggard, who is recognised as a ‘Moogji’ (meaning ‘good mate’ or ‘special friend’) by the Koorie Heritage Trust Moogji Club, will be conducting the ceremony.  The event will include the displaying of the Aboriginal and Australian flags.

The Princes Hill Community Centre, also known as ‘One C One’, will receive the new address of 5 Bagung Lane.

Thank you to all who attended this event on Sunday 22 April, with special mention to Cr Jackie Fristacky and Adam Bandt MP for their support.

In 2017, a request was submitted to City of Yarra Council to assign a name to the east-side lane running north between Macpherson and Pigdon Streets. This was to ensure the building could be located more easily in street directories and GPS 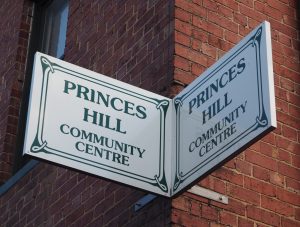 systems and by PHCC attendees.

Following due process and referral to the Wurundjeri Tribal Council, the submission for a preferred Aboriginal name was approved.

Also whilst we are changing our address from Rear 270 Macpherson Street, other property owners on the lane have the choice of retaining their existing address or using ‘Bagung Lane’.

The Princes Hill Community Centre, also known as ‘One C One’, is now known as 5 Bagung Lane.

On the afternoon of Sunday 22 April, the new streets signs were revealed by Trevor Huggard, who for over 40 years was involved with PHCC, many as Committee President.

Trevor Huggard, who is recognised as a ‘Moogji’ (meaning ‘good mate’ or ‘special friend’) by the Koorie Heritage Trust Moogji Club, conducted the ceremony. The event included the displaying of the Aboriginal and Australian flags, and was attended by many local residents. 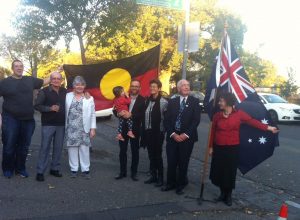 Below is the speech Trevor prepared, although on the day he gave an abridged version to those present. The speech is recommended reading and reflects Trevor’s depth of knowledge of the area and its history, both of the Indigenous people and the European settlement.

meaning – Welcome to the land of the Wurundjeri people

Princes Hill has a remarkable uniqueness, not only as the smallest recorded suburb of the Metropolitan area of Melbourne but also because it was carefully planned, with generous wide lanes wide enough for two trucks to pass in a Hoddle grid pattern, unlike other inner suburban areas with torturous narrow winding lanes to allow for night soil removal.

This foresight of the likes of Cr. John Pigdon, Lord Mayor of Melbourne, who had strict subdivision criteria rigidly adhered to, such as requiring a streetscape façade permit required to be obtained prior to being allowed to purchase the land to build ensured that Princes Hill was built to a very high standard of amenity rare in Melbourne.

The insistence of Pigdon to a new Town Planning Standard is most obvious at the intersection of Pigdon and Lygon Streets where a narrow Pigdon Street, East of Lygon Street, expands out to a tree lined avenue of a wide median strip of alternating Plantanus and Palm trees in a wide garden setting.

The laneways were grander in scale than many of the main streets of the crowded and meanly developed lanes controlled by money hungry developers of the times. However, lanes were not named.

The main streets were restricted to residential addresses and businesses were on ‘Island’ titles separated from the residents such as Evan Evans, Dye Works nearby and the family residence at 12 Wilson Street an easy walking distance up the rear lane.

It was a Utopian view of work and residence to walk to work. We wish! So too did the PHCC Community Centre, a previous factory and store, get built on an isolated island site with laneways on all four sides of the building.

(The west side has been acquired in more recent times by adverse possession.) This peculiar circumstance has left the PHCC building without an address and not a good look for a Community Centre that wants to be easily found! It has temporarily used the address Rear 270 McPherson Street for the last 130 years waiting to resolve the problem.

The PHCC has struggled to be found by many frustrated attendees over the years.  Thankfully this will now not continue. Combining this with the oversight of recognition of our history of the area only recording the past 180 years or so of European settlement and not recording the in excess of 40,000 years or so by our first Australians was to ignore our history and continue to promote the cultural divide..

Munnering Lane where I have resided for the past 46 years was the first attempt to right the omission of acknowledging the original occupants of the area and I was delighted when this decision was made after a campaign to acknowledge in some small way the original custodians of the area.

Thank you to the City of Yarra for its pioneering initiative in recognising our pre-contact history. Does this gesture matter in the bigger picture of acknowledgement and reconciliation?

Yes it does! The importance of every small step towards appropriate acknowledgement and recognition is vital and important, as it is many small steps that ultimately add up to correcting the bigger step to full recognition, which won’t happen overnight.

I remember being quite impressed by a very talented young singer playing in the backyard of the Café Paradiso, a well-known café and coffee shop/restaurant in the 70’s in Lygon Street backing onto the former Pram Factory.

After introducing myself to him after his performance, the young man agreed to come down to our PHCC building known as a legendary music venue as the 1C1 club and play a few songs for us and for him to be included in our community. He was pleased to be asked and included in the community as an equal.

Some of you may have heard of him, as he has kicked on a bit since then – Paul Kelly!  He later wrote a song called to celebrate the Mabo decision that I worked on as part of our Koori Heritage Trust campaign, ‘From Little Things, Big Things Grow’!

Each and every small step in acknowledgement and recognition is important to the Koori community and we are a better community as a whole recognising that.

The motto of the K.H.T. is GNOKAN DANNA MURRA KER KI; “Give me your hand, my friend, and bridge the cultural gap”.

We seem to forget or even recognise that where we live in greatest numbers – on the green fertile river valleys and coastal plains and mountain ranges with plentiful food, is exactly where our pre-contact Indigenous communities lived in great numbers, not the typical red dust arid desert country so typically depicted in our stereotype images of Aboriginal existence.

So Melbourne and the Yarra River Valley was what they loved and thrived in most in pre-European occupation.  They were not nomadic, as they had plentiful food, fish, shellfish, fruit and vegetables, water and game with no need to move on in the land of plenty.

The camp fires of Royal Park were extinguished by the new graziers and their sheep but not the Koori desire to be recognised as part of our community.

The coming of the white man to Port Phillip proved to be an unmitigated disaster for the Wurundjeri, as they were regarded as a serious nuisance to the important business of sheep to the pastoralists!

The early existence of the ‘Çollingwood Stockade’ (where the Lee Street Primary School is today) did not encourage the Wurundjeri to loiter. The sight of men in leg irons breaking basalt rock all day for our lanes would have been terrifying, as would the armed warders and ritual floggings they observed.  If this is how they treat their own, what hope do we have?

The Wurundjeri and Bunurong reacted by refusing to rear children to suffer needlessly in this white man’s world.

A Wurundjeri elder known as Billibillary confided to the authorities that the reasoning for choosing to practice the desperate action of infanticide was, “Black Lubras say now no good children, black fellow say no country now for them, very good we kill and no more come up piccaninny”.

Billibillary had been one of those Koori elders who had earlier signed an unrecognised ‘treaty’ in good faith, with Batman ceding lands to Batman’s invading pastoral party from Van Dieman’s Land.

There are many recorded stories of the Royal Park area being a scene of hundreds of twinkling evening campfires for Indigenous peoples here like a starlit night until they were progressively moved away to make way for the sheep of the powerful pastoralists.

The road known as Boundary Road in North Melbourne meant this is a new boundary for Indigenous community to have to be removed from to make way for sheep!

Go to your Melways and ponder why we have 78 Boundary Roads in Melbourne. Each Boundary Road was the new ‘line in the sand’ for the Aboriginal communities to be legally banned from further occupation – a terrible historic legacy.

We can rightly ask is naming a lane helpful to finally recognise the Indigenous involvement as a vital part of our collective history?

Certainly the forceful removal of the Indigenous community occurred in this area, and nothing can change that, but the ongoing shame is the proactive campaign to remove them from the recorded history of our area could and should be stopped and corrected with events such as this to record our true history wherever possible.

This naming of the lane, unlike our European traditions is not named after a person, but of an important community activity, a ‘Meeting Place’.

Naming places after people can often be controversial or disputed over time requiring it to be changed depending on people’s preferences. Carlton has had many street names changed over time as a result.

It is highly appropriate that our community’s Community Centre will continue the 40,000-year-old tradition of being a Meeting Place.

I think it is a wonderful fit! Continuity of purpose bridging the cultural gap and sharing an historic use such as this. On all three counts, it is a great outcome!

Bagung can be celebrated as a happy event that we can all be proud of, as a progressive and welcoming step.